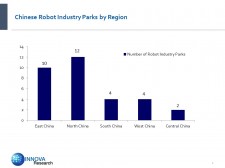 Shanghai, China, September 19, 2016 (Newswire.com) -  ​​​According to the latest survey by Innova Research, at the end of August 2016, 32 robot industry parks have been planned or already set up across China by municipal governments in 14 provinces. The rising of robot industry parks signals that the “replacing human with machines” tide has come to China.

The quickly changing landscape in Chinese manufacturing is driving this wave. A large portion of the Chinese manufacturing companies sit at the low-end of the industry value chain with narrow profit margins. The rapidly growing labor cost in China is further depriving them of profitability and competitiveness. Meanwhile, with the Chinese population aging and the demographic dividend disappearing, the increasing labor cost in China is unlikely to turn lower in the foreseeable future.

Robotics is one of the feasible alternatives to human labor. In 2015, Foxconn, the largest electronics OEM supplier in the world, announced an ambitious plan to adopt one million robots amongst its manufacturing sites in China and other Asian countries. This example is expected to be followed by many other manufacturing companies in China. Encouraged by this trend, a number of local governments are introducing various subsidy plans to cultivate local robot companies to grab a share in the growing industry robot market, inadvertently adding fuel to the fire. Favorable policies include to refund a certain portion of the robot costs to the companies purchasing their first robots, and to give cash reward to robot companies successfully sold their first robots to clients. All these make the Chinese industry robot market very attractive to industry robot suppliers across the world.

Innova Research is a market research and consulting firm focusing on emerging technologies. With the combination of both technology and market research experts, we offer world-class market and technology intelligences.  Driven by primary research, Innova Research’s market intelligence reports and consulting service help our clients to make right strategic and investment decisions in the fast-changing technology world.  Visit www.innovaresearchinc.com for more information.

Get notified about new releases.